We’ve reached November so it’s time for a portfolio update, look at what has happened during October and reveal my plans for the upcoming period.

October has been a very exciting month. It was brutal for equities, with the S&P, Dow and Nasdaq all dropping significantly and with high volatility for the company stock that I own (more about that later), but from where I stand it has been a good month nonetheless. I’ve made some serious progress with my blog, started investing in crowdlending and had some interesting interactions with other financial independence bloggers.

But first things first. Let’s dive into the numbers.

As I already mentioned, October was brutal for equities. I discovered that this wasn’t entirely unexpected. Investopia says this:

What is true is that October has traditionally been the most volatile month for stocks. According to research from LPL Financial, there are more 1 percent or larger swings in October in the S&P 500 than any other month in history dating back to 1950. Some of that can be attributed to the fact that October precedes elections in early November in the U.S., every other year.

It’s what is called the October effect.

As you can see, there is a significant negative income for company shares. This is due to the more than 10% drop in the price of my company’s stock.  While it is significant, it does not bother me too much.

There are a number of reasons for this:

Below is a chart with the month on month income. Overall it is still looking good. Note that the loss in July 2018 is artificial as I sold a fair amount of shares, but left the invested amount untouched (this affected the capital gain obviously). 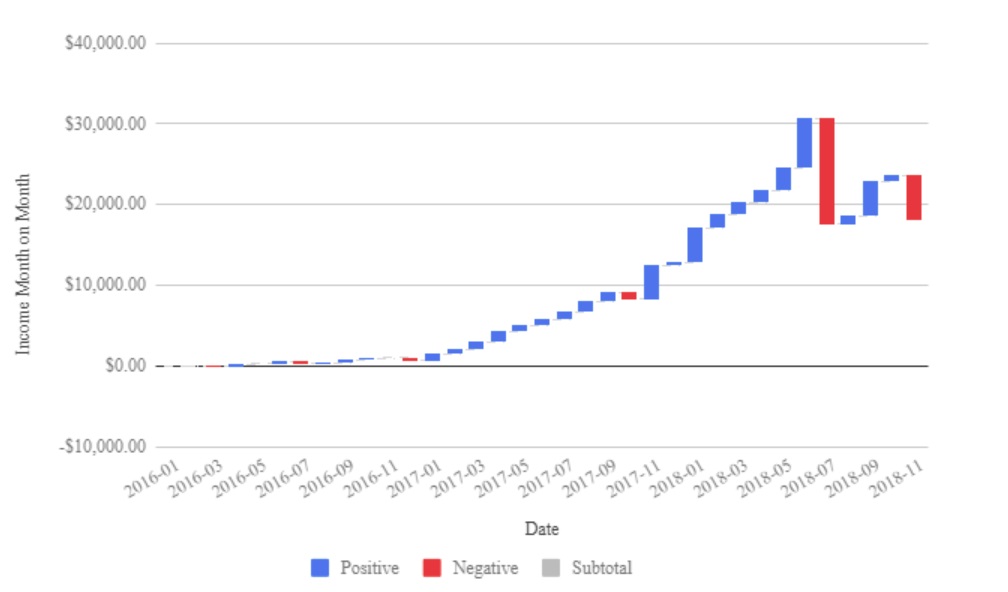 I made my first cents (!) from investing on Mintos (crowdlending platform). Very low and hardly worth mentioning of course, but next month I hope to show some ‘real’ numbers. I will write more about the platform in upcoming posts, but one thing I have done is enable their ‘auto invest’ option. In this way any principal and interest that I receive is immediately reinvested. Let’s see how it goes. 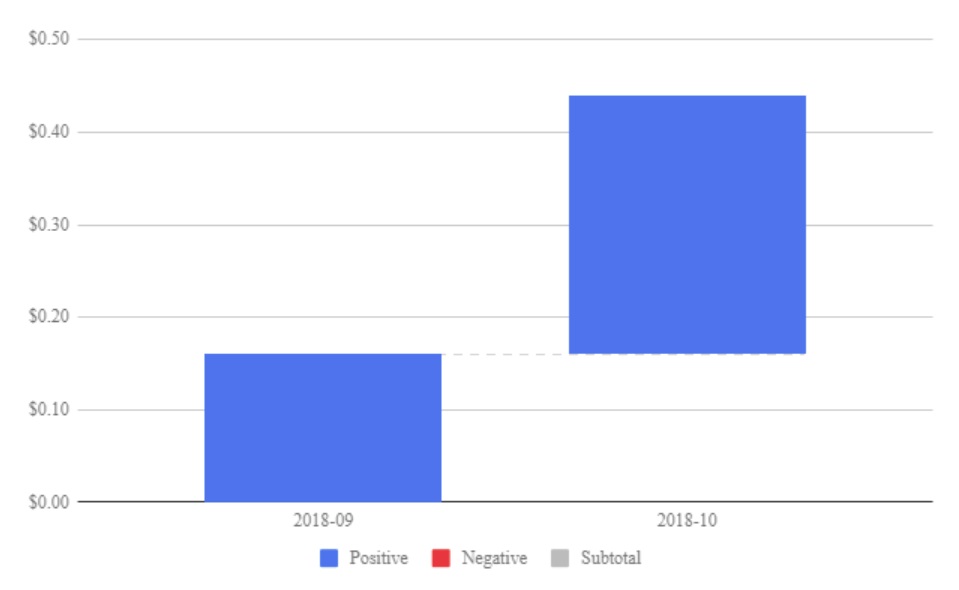 My portfolio is way too concentrated. So I have started to diversify. Not by reducing my investments in company stock (I participate in my company’s ESPP program, allowing me to obtain shares against a discounted price), but by investing additional funds.

At present I invest approximately 75% of my monthly available funds in company stock and 25% in crowdlending. 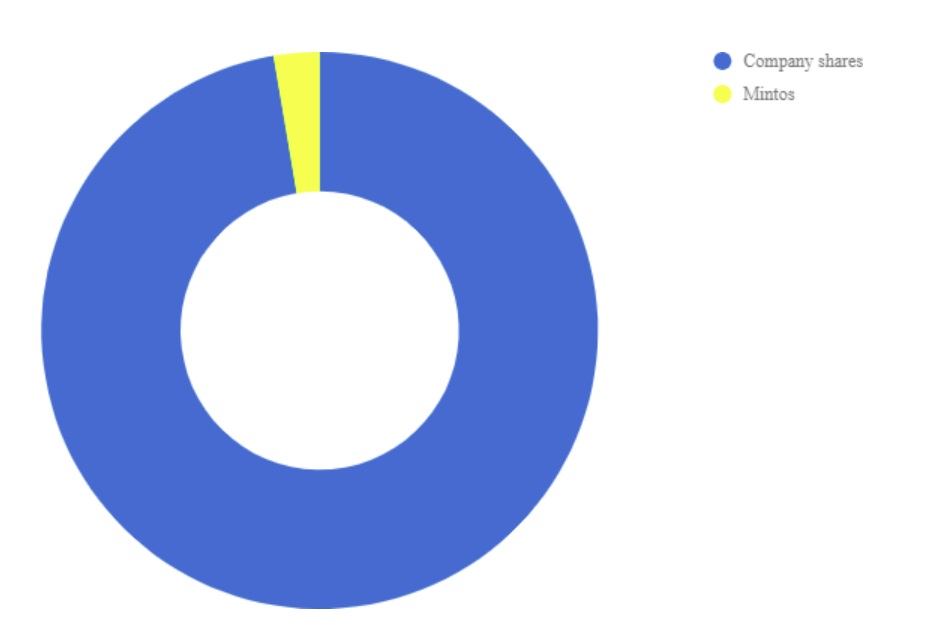 Overall, the portfolio remains very blue of course (company stock). But it’s slightly better than last month, with now 2.7% invested in non-correlated (alternative) assets (Mintos). I will continue to expand on that (aiming for mentioned 25%)

Not reflected in the above portfolio is the equity I hold in my home, which is approximately $300K. I do consider this to be part of my assets.

My total net worth is as follows:

A major activity in October was to expand my blog.

I really enjoyed writing and publishing posts and in the process I had some interesting interactions with several other – more established and way more experienced – personal finance bloggers. I’ve learned about the dogs strategy from Weenie from QuietlySaving, the urgency of having an emergency fund from {in.deed.a.bly}, participated in a thought experiment launched by TheSavingNinja, felt inspired by the musings of both A Purple Life and FIREThe9To5, decided to write my own travel stories after reading about msZiYou’s adventures in Africa.

I’ve published 2 posts per week on average. And although there were a few moments where I thought ‘is there really room for yet another blogging financial independence wannabe?’, I also know that this is as much about the journey as the goal, financial independence. I love writing, have my own unique views and sail a different boat than the other bloggers. We all share the same goal, but we reach it in different ways.

My plans for November:

That’s all for this time!